Yay! My Facebook friends are already aware, but it’s time to let my readership know that Baby Girl has arrived!  The following is the story of labor, delivery, and the first few days at home with our little one.

The labor and delivery were the best I could possibly hope for, and recovery has been very smooth. I was watching Iliza Schlesinger – Freezing Hot on Netflix when all of a sudden my water broke. I high tailed it to the bathroom before potentially ruining the couch. It wasn’t like the movies, but there was no mistake as to what I was experiencing.

Jeff was on the computer in the dining room at the time. He had some client work to finish up and I was trying to let him concentrate. He asked me if I was making an emergency pee break (as had become the norm in the last few weeks of pregnancy,) and I told him “I’m pretty sure my water broke.”

It took him a moment to register what I had said, but then he sprang into action.  First he brought me a change of clothes, then started gathering the last minute items for the hospital bag. My adrenaline was going so hard that I couldn’t even tell if contractions had started. I put a call in to my doctor’s office to let them know what was up. The on call doctor told me, happily, to head on in to the hospital.

Jeff loaded up the car and drove us the 40 minutes to the hospital. In the mean time, I called my siblings, parents (including in laws), and my grandma to let them know. My sister provided advice over the phone that let me settle my nerves a bit… Basically, that I’d live, so I better not kill my husband in the process 😛 Ah-ha! It clicked for me that I could treat this like a roller coaster: thrilling, exciting, scary, but ultimately something to live through and enjoy.

We went through evaluation first, and they determined that baby was indeed ready to come into the world.

The first half of labor was intense. My poor husband had to bear with me as the pain of the contractions caused me to toss my cookies multiple times. The tremors that I had were pretty uncontrollable, but we expected both of these things and so took them in stride.  This part lasted about 4 hours, but it only felt like 20 minutes to me. I used breathing techniques, and tried to color my way through the pain.

Me and Jeff had discussed pain management and interventions at length, and I’d already had experience with this hospital and their anesthesiologists, so I decided to request an epidural.  It was late, I was exhausted, and MY doctor wouldn’t be in call until 6 am. If I could hold out until then, maybe I’d get to have him at the delivery.  As usual, I had jokes to tell and made quite a few of them in the delivery room.  When the anesthesiologist showed up, I cracked that I wasn’t a plumber… because.. well. Hospital robes, am I right? 😛

The needles were horrid.  I had to have an IV in my hand, had to have blood drawn, and of course inserting the epidural itself.  It was the weirdest sensation as the fluids began to flow–it was a rush of cooling under my skin.  The nurses that cared for me were so kind and attentive.  I was able to move to get comfortable in the hospital bed, and they offered me a “peanut ball” to help position me so that labor could progress while allowing me to be comfortable enough to rest a bit.  And so, rest I did.  It was already such a late night and I was so exhausted.  Sleep was impossible, even with the epidural, but the rest was nice, and not tossing my cookies and shaking with every contraction was a great change of pace.

At 6am, the nurse came in and said it was time to push.  Oh man, I got nervous again.. This was *REALLY* happening!  We did a practice push–which sounds silly, but it was totally necessary.  It took a few tries to get the hang of it, but once I did, the race was on.  My doctor should’ve been on call by then, but the on-call doctor was closer. Still, though, not close enough!  30 minutes after I was told to push, I was told by a wide-eyed nurse to just stop pushing O___O

How was I supposed to ignore those contractions?!

With encouragement from Jeff and the nurses, I breathed through a few contractions until the on-call doctor could arrive.  She asked for one good push, I obliged, and Baby Girl came into the world squalling.  Oh my goodness.. They put her on my tummy and she was crying with a lip quiver that made her sound like a little lamb.  I looked from her to Jeff and just felt completely overwhelmed with emotion.  I know I started crying right away.

It was so funny, though… After cutting the cord, (which they were amazed about–apparently it was substantial), they wanted to put her on my chest and I had to decline for a moment… because it was very obvious that her digestive system was working! HA!  My humor was on display again when I quipped with the nurses that I was pretty sure I’d be wearing enough poo and pee over the next few weeks.  They cleaned her up, took her temp, weighed her.. and brought her back right away so that we could start bonding.  Oh I just loved her so much from the very first moment. 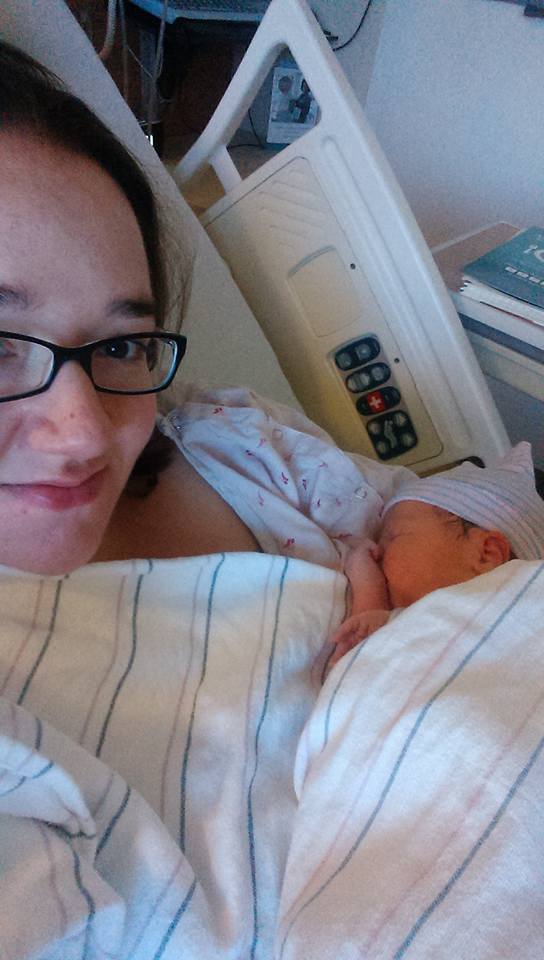 Of course Jeff did too.  In fact, he did skin to skin with her while I was dealing with nurses shortly after she was born–after the golden hour, but still early on in her life.  Those two are just so bonded now.  He’s got the magic touch that lets her calm right down in his arms.  She’s got the little worried look that lets him know that she could use a daddy-hug.  It’s a beautiful thing.

We stayed in the hospital for the full 48 hours that insurance allows.  It was essential for us to do that so that me and Baby Girl could have the full benefit of the Lactation Consultants and nursing staff that were there.  Even so, she still lost 8% of her birth weight before we were discharged.  At her 2 day check up, she was down 10%, and they weren’t happy.  I had ‘marching orders’ to wake Baby Girl every 2-3 hours to feed–from the start of one feed to the next.  Two days later, she weighed in and had gained 2 ounces, so that was encouraging.  We bonded together at home and did our best to stick to the plan.  We had a check up recently and she still hasn’t gained enough, so we’re working through that together.

She’s 18 days old at this point.  Our days go like this – wake up, let’s say 8:30am for the day.  Change of diaper, breakfast, snuggles, and she’s back to sleep–hopefully.  Sometimes she wants to keep nursing.  10:30, 2nd breakfast for my little hobbit, another change, some more snuggles, then some breakfast for me.  12:30, time for lunch for her, another diaper (or two) then lunch for me. 2:30, afternoon snacks! More diapers, more snuggles, and *maybe* some errands ran. 4:30ish, more food for little one, diapers too, and trying to figure out dinner for Jeffrah and me.  6:30, Another diaper! Dinner for Baby Girl, then dinner for me and Jeff.  8:30, evening meal for BG, “last” diaper, and some Netflix for me and Jeff.  More snuggles, then a “final” feeding before bed at 10:30pm.  This is where we run into trouble because sometimes she decides to stay up and fuss from 10:30-2am. If not, we wake her up every 3 hours to make sure she’s getting enough to eat.

She gets a ton of snuggles 🙂

We are completely smitten with this little girl.  She’s got a variety of pet names and endearments that have been bestowed on her.  When featured in this blog, we’ll just call her Baby Girl 🙂

I’ve got a bit of time at home in the following weeks, so I’m hoping to update much more often–at least once per week!