This post contains a couple of swear words.  Fair Warning 🙂

So, (there I go again), I am in dire need of studying because I found out today that there’s an assignment due on Thursday but I hadn’t actually received my “textbooks” until this afternoon.  I am torn between studying and gaming, though, and so I find myself here: procrastinating. 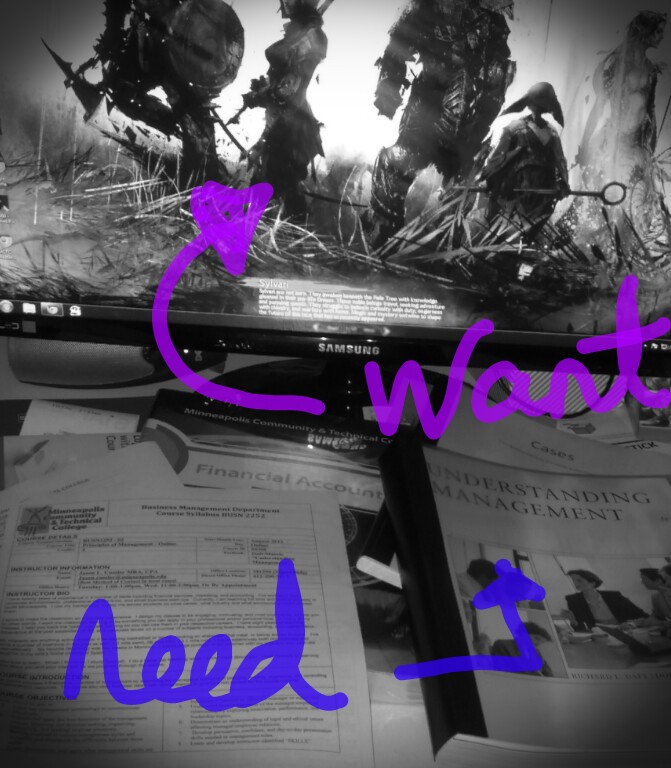 I was so fuming mad this afternoon dealing with the fiasco that is MCTC.  Jeff was going to pick up the books for me as he has more flexibility in his schedule, but when I called to verify stock, they were outrageous.  They refused to check to see if the books were there and said they were too busy and that there was a line inside the store and outside the store and we would just have to come down there.  They wouldn’t even say whether we could pay with AMEX or not.  I went on a tirade about getting what you pay for (because this is one of the cheapest schools in the area) and then ended up just going to the bookstore myself.

The “line” that they exaggerated and made out to be miles long was just about 10 people.  And the only reason that there was a line was to check book bags.  Waste. Of. Time.  So after I get through that line, I pull my “books” from the stacks, sure that I am missing something, because what is labeled as a book is actually a ream of paper wrapped in kitchen-grade saran wrap.  Looks like it’s got the POTENTIAL to be a book, but it’s just not quite there yet.  Kind of like this college and how it’s just on the cusp of being great but just falls short and ends up being mediocre.  I waited in line for the check-out while a huffy student in front of me threw fits about waiting in line (for 20 minutes) to buy a 70 cent bag of chips.

When I got to the check out, the woman was probably having a good day and I probably wrecked it. 😦 I wanted to know where the binding was.  She replied that most people were buying their own binders and kindly directed me to the back of the store to pick one out.  I replied that after paying over a thousand dollars in tuition and over one hundred and sixty dollars for the book the least of my expectations is that it be bound and said “Can’t you do anything about that?” She smirked (which toppled my negative attitude from veiled contempt for outright disgust) and said “nope.”  So, naturally I mocked her, she responded with a highly impressive level of sarcasm and we went our separate ways.  Truth be told, I think our skill levels were quite equal when it comes to being bitchy when the situation calls for it.  I’m being ripped off by a rigged institution (can’t buy the book used or resell it due to this lack of binding and because of an access code that’s required) so I was bitchy, and she was bitchy because it wasn’t her fault at all.  I was sincerely impressed with her level of sarcasm because if I weren’t so well versed in it, it would appear to be great customer service.  Plus 5 to her.

Plus 5 to me, too, though.  Refusing to spend one red cent more than necessary at the college library, I headed over to the nearest office supply store.  Staples was able to cleanly bind my book into two parts – separating the case studies from the actual text will come in handy over the course of the semester.  I got two books bound and bought two notebooks for eight bucks.

At this point, I find it prudent to begin my studies… if only so I can go back to playing Guild Wars 2.  Here’s a bonus screen shot of Harkin and Aminarra at a vista in Rata Sum:

6 thoughts on “The cure to indecision? Procrastination.”