Yeeeaaaahhh… My version of orange chicken turned out almost nothing like the picture that I pinned on my pinterest foodies board.  When I was at the grocery store, a friend in need called and I missed out on a couple of ingredients such as the  sesame seeds, red pepper flakes and scallions.  We made due with what we had, though, and it turned out pretty wicked (in a good way). 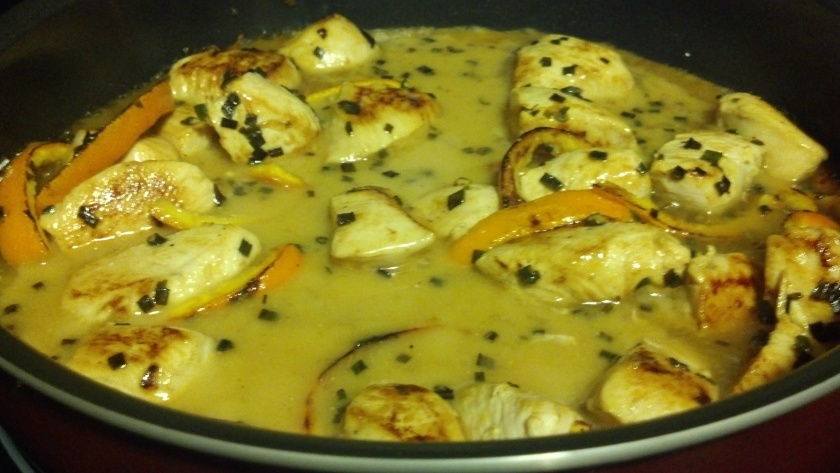 After going through this process, I would say that there are some things to be desired in the recipe, as far as instructions go.  Here is how the recipe was published on laaloosh:

Directions:
In a bowl, whisk together the soy sauce, broth, sugar, cornstarch, ginger, and vinegar, then set aside.
In a large skillet, heat peanut oil on medium-high heat. Add orange rinds, scallions, garlic and red pepper flakes and cook for about 2 minutes. Add in the chicken and cook for approximately 6 minutes, or until chicken is golden brown.
Now mix in the sauce and let simmer until the chicken is cooked all the way through and the sauce starts to get thick, this should take approximately 3-4 minutes. On a plate, serve chicken and sauce over rice and garnish with a sprinkle of sesame seeds

Here is what I learned by doing:

– Cook the rice according to package directions.  Then strain the rice because there’s still too much liquid when it’s done.

– Use an itty bit more oil.  It was pretty well gone before the chicken even got there.

– Dice the orange rind if you intend to eat it.

– On that note, add a little bit more sugar to the sauce recipe so that it caramelizes a little more.

– Dried chives are not the same as fresh scallions.

– Rice vinegar, though, is a good substitute for white wine vinegar.

– Use the pulp from the orange that you chopped up in a fresh house salad to serve alongside your chicken:

All in all, this recipe has got lots of potential, but we just need to refine the way that we cooked it a little and actually use all of the ingredients called for 🙂 We will probably make this again.  1 serving has 6 points on a popular weight loss program.